Su-25M warplanes that belong to the Azerbaijan Air Force Command started to use the Laser Guidance Kit (LGK) developed by ASELSAN.

Efforts to integrate the Laser Guidance Kit developed by Turkish defense industry company ASELSAN into the 250 kilogram general purpose bomb developed by the Ministry of Defence Industry of Azerbaijan (MODIAR) have been continuing for a long time. The guided aircraft bomb named “QFAB-250 LG”, created with ASELSAN’s LGK and MODIAR’s 250 kilogram bomb, was later exhibited during IDEF-2019.

The QFAB-250 LG bomb, integrated into Su-25M (NATO Report Name: Frogfoot) warplanes in the inventory of the Azerbaijan Air Force Command, has been put into operational use. According to the information obtained; QFAB-250 LG was used by Azerbaijan Su-25Ms during the military operation launched by the Azerbaijan Army in the Karabakh region on September 27, 2020. Following the laser marking by Bayraktar TB2 Armed Unmanned Aerial Vehicle (SİHA), the Su-25M fighter aircraft successfully hit the targets of the Armenian Army with the QFAB-250 LG. 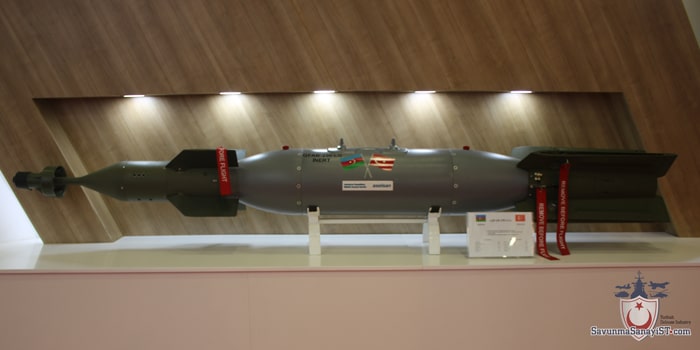 According to the information obtained by SavunmaSanayiST.com from the Ministry of Defence Industry of Azerbaijan, the technical specifications of the QFAB-250 LG are as follows: