The Electric and Unmanned T629 Attack Helicopter was viewed for the first time today at Turkish Aerospace facilities. The helicopter will have different configurations.

The first T129 ATAK Helicopter Delivery Ceremony was held today with the General Directorate of Security at Turkish Aviation facilities located in Kahramankazan. During the ceremony held with the participation of  President of Defence Industries Prof. Dr. İsmail DEMİR, important information about the ongoing projects was shared.

At the ceremony, “T629 Attack Helicopter”, one of the three attack helicopter projects already carried out by Turkish Aerospace, drew attention. This helicopter, which is quite different from the T629, and which the public first saw in June 2020, has been developed unmanned and electric. Turkish Aerospace is also developing a classic manned configuration of the T629 helicopter. In summary, within the scope of the T629 project, they plan to develop two different helicopters in manned and unmanned/electric structure.

It is believed that the unmanned and electric T629 Attack Helicopter will be especially useful for the Turkish Naval Forces Command. It is expected that the Turkish Navy, which needs a helicopter platform for the TCG ANADOLU amphibious assault ship, which they plan to add to the inventory in the near future, will be able to fulfill a significant part of this need with the T629. 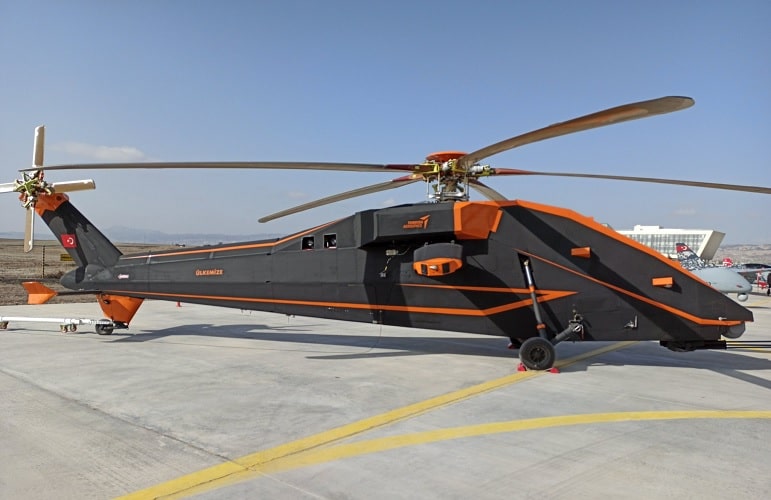 The “Conceptual Design Initiation” of the T629 Attack Helicopter, which was developed with theTurkish Aerospace’s own resources, was carried out on August 14, 2017. It is known that the design activities of the T629 are largely completed.

Thanks to T629, one of the three attack helicopter projects carried out by Turkish Aerospace, Turkey will have an intermediate platform between (five-ton T129 ATAK Attack and Tactical Reconnaissance Helicopter) to (ten-ton Heavy Class Attack Helicopter) . The T629 Attack Helicopter, which is known to weigh a maximum of six tons, will have a similar appearance to the T129 ATAK Attack and Tactical Reconnaissance Helicopter. One ton heavier than the T129 ATAK, the T-629 will have more ammunition – especially 20mm cannon ammunition – and sensor capacity.